I’m a Doctor, and I Was Addicted to Opioids. It Can Happen to Anyone

Home/I’m a Doctor, and I Was Addicted to Opioids. It Can Happen to Anyone
Previous Next

I’m a Doctor, and I Was Addicted to Opioids. It Can Happen to Anyone

Dr. Faye Jamali shares the realities of this crisis with her personal story of addiction and recovery.

What started as a fun-filled day to celebrate her children’s birthdays ended with a fall that changed Dr. Faye Jamali’s life forever.

Near the end of the birthday party, Jamali went to her car to get goody bags for the children. As she was walking in the parking lot, she slipped and broke her wrist.

The injury caused Jamali, then 40, to undergo two surgeries in 2007.

“After the surgeries, the orthopedic surgeon gave me a bunch of pain meds,” Jamali says.

With 15 years of experience as an anesthesiologist, she knew that the prescription was standard practice at the time.

“We were told in medical school, residency, and our [clinical] workplaces that… there wasn’t an addictive issue with these medications if they were used to treat surgical pain,” Jamali says.

Because she was experiencing a lot of pain, Jamali took Vicodin every three to four hours.

“The pain got better with the meds, but what I noticed is that when I took the meds, I didn’t get as stressed as much. If I had a fight with my husband, I didn’t care and it didn’t hurt me as much. The meds seemed to make everything OK,” she says.

The emotional effects of the drugs sent Jamali down a slippery slope.

I didn’t do it often at first. But if I was having a hectic day, I thought, If I could just take one of these Vicodin, I’ll feel better. That’s how it started,” explains Jamali.

She also endured migraine headaches during her period for years. When a migraine struck, she sometimes found herself in the emergency room getting an injection of narcotics to ease the pain.

“One day, at the end of my shift, I started getting a really bad migraine. We discard our waste for narcotics at the end of the day in a machine, but it occurred to me that instead of wasting them, I could just take the meds to treat my headache and avoid going to the ER. I thought, I’m a doctor, I’ll just inject myself,” Jamali recalls.

She went into the bathroom and injected the narcotics into her arm.

“I immediately felt guilty, knew I crossed a line, and told myself I’d never do it again,” Jamali says.

But the next day, at the end of her shift, her migraine hit again. She found herself back in the bathroom, injecting the meds.

“This time, for the first time, I had euphoria associated with the medicine. Before it just took care of the pain. But the dosage I gave myself truly made me feel like something broke in my brain. I was very upset with myself for having access to this amazing stuff for so many years and never using it,” Jamali says. “That’s the point where I feel like my brain was hijacked.”

Over the next several months, she gradually upped her dosage in an attempt to chase that euphoric feeling. By three months in, Jamali was taking 10 times as much narcotics as she first injected.

Every time I injected, I thought, Never again. I can’t be an addict. An addict is the homeless person on the street. I’m a doctor. I’m a soccer mom. This can’t be me,” Jamali says. 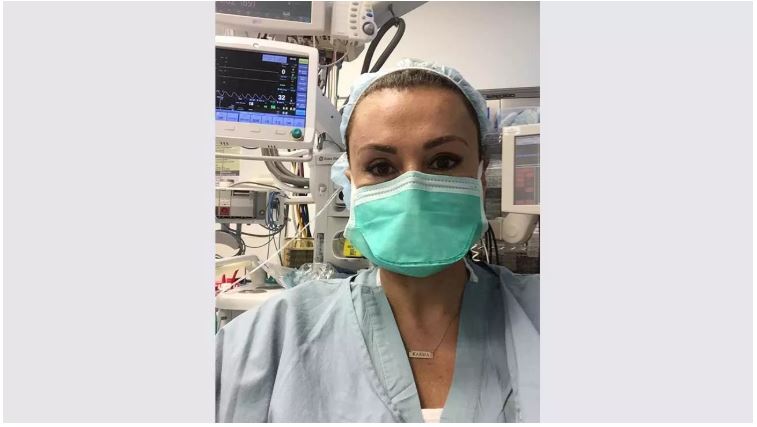 Your average person with addiction problems, just in a white coat

Jamali soon found out that the stereotype of a “typical addict” isn’t accurate and wouldn’t keep her safe from addiction.

She recalls a time when she got into a fight with her husband and drove to the hospital, went straight to the recovery room, and checked out medication from the narcotic machine under a patient’s name.

“I said hi to the nurses and went right to the bathroom and injected. I woke up on the floor about one or two hours later with the needle still in my arm. I had vomited and urinated on myself. You’d think I would have been horrified, but instead I cleaned myself up and was furious at my husband, because if we hadn’t had that fight, I wouldn’t have had to go and inject,” Jamali says.

Your brain will do anything to keep you using. Opioid addiction is not a moral or ethical failing. Your brain becomes changed,” Jamali explains.

Jamali says the clinical depression she developed in her 30s, chronic pain from her wrist and migraines, and access to opioids set her up for an addiction.However, causes of addiction vary from person to person. And there’s no doubt the issue is prevalent in the United States, with the Centers for Disease Control and Prevention reporting that more than 200,000 people died in the United States from prescription opioid-related overdoses between 1999 and 2016.

Additionally, overdose deaths connected to prescription opioids were 5 times higher in 2016 than 1999, with more than 90 people dying each day due to opioids in 2016.

Jamali’s hope is to break the stereotypical addict often portrayed in the media and minds of many Americans.

This can happen to anyone. Once you are in your addiction, there is nothing anybody can do until you get help. The problem is, it is so hard to get help,” Jamali says.

Addiction Campuses offer a uniquely tailored solution to every client by treating substance addiction medically, mentally and spiritually.Speak with a Treatment Specialist today.

“We are going to lose a generation to this disease unless we put money into recovery and unless we stop stigmatizing this as a moral or criminal failing of people,” she says.

Losing her job and getting help

A few weeks after Jamali woke up mortified in the bathroom at work, she was questioned by hospital personnel about the amount of medications she’d been checking out.

“They asked me to hand over my badge and told me I was on suspension until they completed their investigation,” Jamali recalls.

That night, she admitted to her husband what was going on.

“This was the lowest point in my life. We were already having marital problems, and I figured he’d kick me out, take the kids, and then with no job and no family, I’d lose everything,” she says. “But I just rolled up my sleeves and showed him the track marks on my arms.”

While her husband was shocked — Jamali rarely drank alcohol and never did drugs previously — he promised to support her in rehab and recovery.

The next day, she entered an outpatient recovery program in the San Francisco Bay Area.

My first day in rehab, I had no idea what to expect. I show up dressed nicely with a pearl necklace on, and I sit down next to this guy who says, ‘What are you here for? Alcohol?’ I said, ‘No. I inject narcotics.’ He was shocked,” Jamali says.For about five months, she spent all day in recovery and went home at night. After that, she spent several more months attending meetings with her sponsor and exercising self-help practices, such as meditation.

“I was extremely fortunate that I had a job and insurance. I had a holistic approach to recovery that went on for a year,” she says.

During her recovery, Jamali realized the stigma that surrounds addiction.

“The disease may not have been my responsibility, but the recovery is 100 percent my responsibility. I learned that if I do my recovery daily, I can have an amazing life. In fact, a much better life than I did before, because in my old life, I had to numb the pain without actually feeling the pain,” Jamali says.

About six years into her recovery, Jamali received a breast cancer diagnosis. After undergoing six operations, she wound up having a double mastectomy. Through it all, she was able to take pain medication for a few days as directed.

“I gave them to my husband, and I didn’t know where they were in the house. I upped my recovery meetings during this time, too,” she says.

Around the same time, her mother nearly died from a stroke.

“I was able to cope with all of this without relying on a substance. As ridiculous as it sounds, I’m grateful for my experience with addiction, because in recovery, I gained tools,” Jamali says.

It took the Medical Board of California two years to review Jamali’s case. By the time they put her on probation, she’d been in recovery for two years.

For seven years, Jamali underwent urine testing once a week. However, after a year on suspension, her hospital allowed her to go back to work.

Jamali returned to work gradually. For the first three months, someone accompanied her on the job at all times and monitored her work. The physician in charge of her recovery also prescribed the opioid blocker naltrexone.

A year after she completed her probation in 2015, she left her job in anesthesia to embark on a new career in aesthetic medicine, which includes performing procedures like Botox, fillers, and laser skin rejuvenation.

“I’m 50 years old now, and I’m really excited about the next chapter. Because of recovery, I’m brave enough to make decisions that are good for my life,” she says.

Jamali also hopes to bring good to others by advocating for opioid addiction awareness and change.

Although strides are being made to help alleviate the opioid crisis, Jamali says more needs to be done.

“Shame is what keeps people from getting the help they need. By sharing my story, I can’t control people’s judgement of me, but I can potentially help someone who needs it,” she says.

Her hope is to break the stereotypical addict often portrayed in the media and minds of many Americans.

My story, when it comes down it, is no different than the homeless person shooting up on the street corner,” Jamali says. “Once your brain is hijacked by opioids, even though you may not look like a typical user, you are the person on the street. You are the heroin addict.

Jamali also spends time talking with doctors who find themselves in the same situation she once was.

“If this started over an orthopedic injury to someone like me in their 40s with no history of drug or alcohol problems, it can happen to anyone,” Jamali points out. “And as we know in this country, it is.”